My daily commitment is to invest at least one hour on delegation and outsourcing activities. Yesterday I invested a little over two hours, mostly researching services to try. I decided to start with some personal tasks since I figured that would be a good way to ease into this.

Here’s what I did on the first day:

I showed Rachelle how to use our newest floor cleaning robot that we’ve had for several weeks, so she now knows how to run it whenever she desires. Our kitchen floor has remained a lot cleaner thanks to this little guy, whom we nicknamed Schmoppie. This took only a few minutes, but it means I don’t always have to be the robot manager guy. This felt like a nice, easy step forward, helping me get into the mindset of sharing more responsibility and inviting help. And it empowers Rachelle since now she can run Schmoppie whenever she wants.

I also spent some time reviewing simple personal tasks that I can start outsourcing. I already had a list of these sitting on my laptop, so I just went over my pre-existing list. I need to hire a new monthly landscaping service for my house. There are 3 underwater pool lights that are burnt out and need changing. A broken hot water recirculating pump needs replacing. And so on. I know… first world problems… but this helped me load in the mindset. Some of these items have been on my to-do list for many months.

Even though I’ve reviewed that list before, this time it was different because I was finally serious about assigning these tasks to someone to get them done. That’s a different feeling than just framing them as someday/maybe tasks. In the past I had always de-prioritized such tasks because they never seemed important enough. But now I’m committed to freeing up that stuck energy. It feels good to raise the priority of these items within the scope of a new personal growth experiment.

By “stuck energy” I’m referring to little tasks that I’ve put off for a long time, always framing them as trivial or unimportant, even though they may repeatedly nag at me. These often involve minor repairs around the house and minor to-dos that pile up.

It’s amazing how badly we can procrastinate on relatively small tasks and projects. As a simple example, the hot water recirculating pump for my house broke several years ago. This pump circulates the hot water from the water heater throughout the pipes in the house and then back into the water heater, so when you turn on the hot water anywhere in the house, it runs hot almost immediately without having to warm up first. I bought a new pump to replace the old one in July 2015, and it’s been sitting in my garage for nearly 3 years, waiting to be installed all this time. It would probably take someone less than an hour to install it. But of course I never felt like dealing with the hassle of finding someone to do it, and it’s not something I feel qualified to do myself.

After reviewing my previous home fix-it list, I checked with Amazon Home Services to see if I could hire someone for some of these home maintenance tasks. In the past I’ve used them to find someone to fix a broken A/C unit, which worked well. Other times I’ve used Yelp, but that can take a long time to research and find someone good. Unfortunately Amazon doesn’t offer the specific services I need, and I didn’t see any options for inviting bids on custom tasks. Amazon seems like it could be a reasonable choice for a narrow range of tasks, so I might try them for something else if I think they’d be a good fit.

Then I spent about an hour researching a few services that others had recommended and setting up accounts. This day was mostly preparation, which I felt was time well spent.

The first outsourcing service I decided to test is called Magic. I’d been hearing some buzz about Magic from a few friends and blog readers, so I figured it was a good place to start. I signed up for an account with them last night, which was pretty easy.

Magic is a general outsourcing service. You assign tasks to them just by texting them or via their free app. Think of it like a concierge service. They have a staff of trained virtual assistants to help you get things done. Their job is to figure out how to get your tasks done, such as by calling people on your behalf, so you don’t have to micro-manage them. Just give them a task, and they’ll follow up and ask you for details if they need anything from you. Then they charge you for whatever they paid for the task plus their fee.

I think you can also give them parameters like if you want to limit how much time they spend on something or constrain the final cost.

Their fee is 59 cents per minute for their time ($35.40 per hour), but they’re currently moving to a new subscription model with these options: 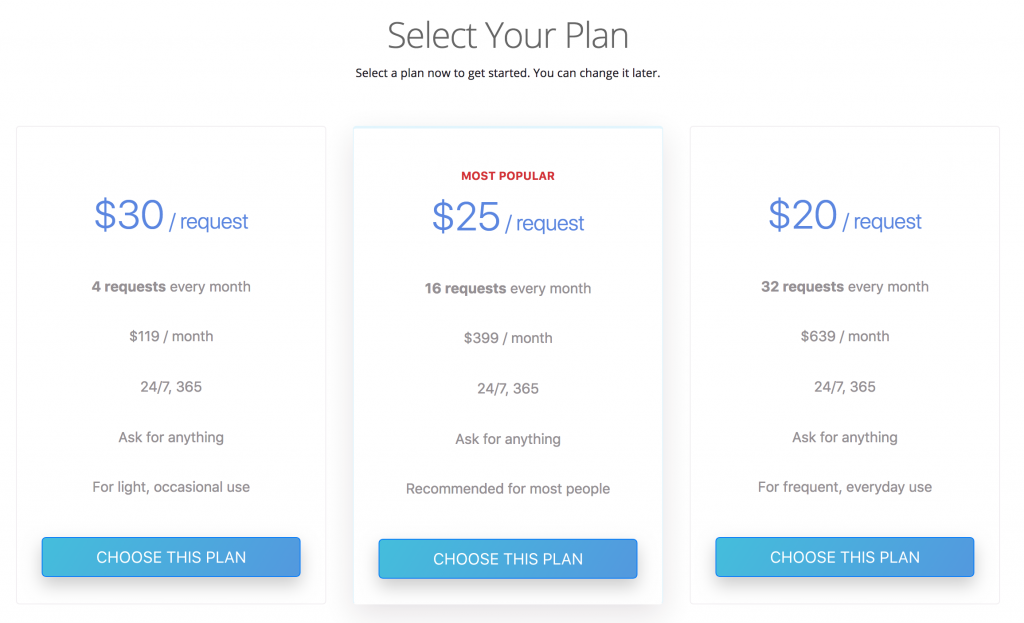 They also have a 30-day money-back guarantee.

I wanted to try the service first without a monthly commitment, but I didn’t see an option to bypass choosing a subscription. So I texted them at this point to ask, and they were able to set me up without a subscription, so I’m on the 59 cents per minute pay-as-you-go plan. I’m not sure how much longer they’ll offer the pay-as-you-go option, but it seems like a nice way to try it.

By the way, if you want to try Magic yourself and you use my referral link to join, you’ll get a free hour of their service, and so will I. Just be aware that I’m not giving them a personal thumbs up at this point since I only signed up with them less than 24 hours ago, so I’m a newbie user too. Some people I trust have said they like the service, and Magic has been evolving for a few years, so I thought this seemed promising enough to take a deeper look.

You could pay less by hiring your own virtual assistant too, but I think Magic could be more efficient at some tasks since they can assign your tasks to someone with relevant experience in that particular area. They have a team of people with different skills, so you’re not limited by the skills of a single person.

This morning while having breakfast, I assigned a couple of tasks to Magic by texting them, which only took a few minutes.

Here’s how it went: 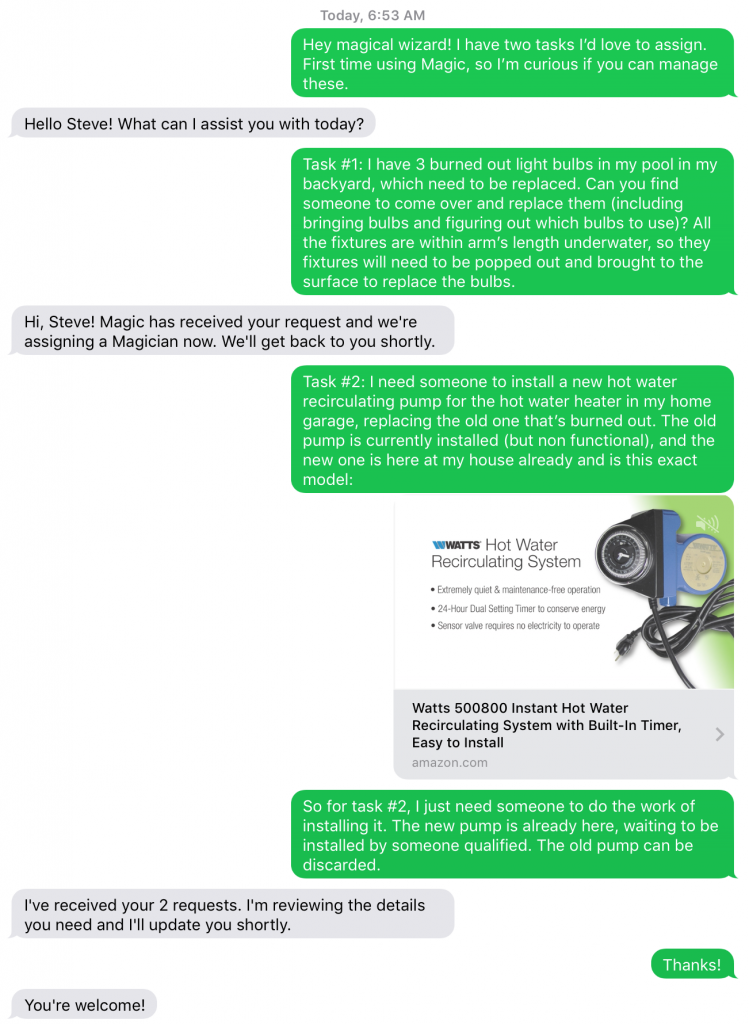 Then they said they’d get back to me with an update at 9am. That’s because services weren’t open at 7am for them to contact when I first assigned these tasks.

At precisely 9am I got another series of texts from them with a status update. They’d already contacted 5 different handyman services and had calls into a few more to request quotes. Interestingly, they’re attempting to find one person/service who can handle both tasks in a single visit. So far they haven’t found anyone, but it’s great to see that they’re moving this forward like intelligent human beings.

It’s neat that they’re trying to batch tasks like this (if it works). Knowing that such batching is possible, it may be effective to assign them several related tasks together, especially when doing the per minute pay option instead of the per task.

Within the past 90 minutes, I’ve continued to get status updates from them. At this point it now feels like they’ve assumed responsibility for getting these tasks done, and now they’re leading me, asking for additional info as needed. I feel like I can be pretty passive at this point, and stuff will just get done. That’s a nice feeling – positive and hopeful.

This is new territory for me, but I’m finding it exciting so far. Just getting someone else involved makes a real difference. It prevents tasks from perpetually hiding on the back burner and moves them into the world of action. And all it takes is sending a single text message. Trapped energy that’s been stuck for years can be released in a matter of seconds. Fascinating.

One thing I like about doing this challenge with a group of friends is that we can all share progress and compare notes on different services, strategies, and approaches that we try along the way. Our accountability thread in CGC is up to 58 posts already, and we just started this challenge yesterday. Seeing others taking action pushes me to take more action since I don’t want to feel like everyone is zooming ahead without me. FOMO (fear of missing out) can be a great motivator. I imagine that my own progress updates will help others get swept into more action as well.

Additionally I worked this morning on helping Rachelle to begin taking over the weekly Conscious Growth Club emails that we send to our members. These emails have been pretty bare bones for the past year that I’ve been sending them (really just a reminder for the next live video coaching call). We’re working on adding more value to them starting this week, such as by highlighting interesting discussions from the member forums. The email that gets sent out today will be written by Rachelle instead of me. Since she’s our community manager, I eventually want to set her up to handle scheduling the coaching calls and sending these emails without any direct involvement from me. Or she can outsource that to someone else if she wants. 🙂

There’s going to be a learning curve here, and I’ll surely make some mistakes during these 30 days. Mistakes are nothing to fear though – I’ve made some fine ones in my life. I think we should be proud of our mistakes, especially the big ones. It means we’re learning and growing and pushing beyond our comfort zones.