When I checked my email this morning, I was puzzled to see several messages with subjects asking about Las Vegas or if I was okay. I figured I’d better check the news, and I soon learned of the shooting that happened at the concert across from the Mandalay Bay Hotel.

I know the location well and was at the Mandalay Bay a few weeks ago. It’s on the south end of the Vegas Strip about 20 minutes from where I live. Four of our workshops in 2011 and 2012 were held at the Tropicana Hotel just a short walk from the concert area.

I’d imagine that most of the concertgoers were probably tourists visiting from out of town, so this event will likely affect families in many different cities.

My reaction to this isn’t one of fear, anger, or shock. I learned about this through expressions of caring from friends wanting to check in, including some I haven’t heard from in a long time. By the time I learned what happened, I was already primed to be in a state of caring. 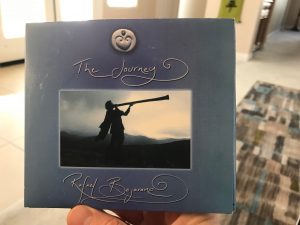 A few days ago, I was decluttering my garage and sorting some items to donate. I came across a CD from a musician named Rafael Bejarano. Rafael and I met when we spoke at our mutual friend Rich Litvin’s wonderful coaching event in 2013. I loved Rafael’s music, which he played at the event, and he gave me a CD of his. I also loved that he had such a gentle, caring, peaceful vibe.

In 2015 Rafael was in Egypt, having a picnic in the desert with some other Mexican tourists. I think they were on a retreat together. Unfortunately the Egyptian military mistook their peaceful group for militants and opened fire from a helicopter, killing many of them, including Rafael. 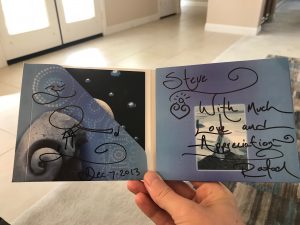 As I held Rafael’s CD, which he had signed by drawing an image of himself playing the didgeridoo, I remembered how important it is to play our music while we’re here and not to hold back in sharing, connecting, and expressing our best.

We can perceive such events as tragedies, and we can react with more fear, anger, and worry. We can step into blame and aggression. But will such responses actually help? I don’t see how they can.

To me this reinforces the need to keep creating more ripples of caring and compassion, to remember how precious life is, and to share our music while we’re here.

If we are to respond to this incident, then let’s not respond with more fear-based thinking, if only because it’s ineffective to do so. Let’s respond more consciously – with actions motivated by caring, kindness, and compassion.

If events like these mean something to you, then seek the deepest and most empowering meaning you can extract from them. Seek the meaning that makes you feel more grounded, more loving, and more empowered. For me that meaning is the powerful reminder to keep contributing from a place of caring, to help people connect more deeply, and to share my inner music no matter how tempting it may be to hide instead.

When it’s my time to go, I want to go out like Rafael did – with his journey already gifted to the world.