In all the feedback I’ve received thus far about our audio program in the works, the most common question I’m asked is: Why are there no women on your team?

The simplest answer is that this happened mainly as a matter of logistics. It wasn’t a pre-planned choice to put together an all male team. The idea for this program was only conceived several days ago. The team invites were made with a group of friends that I was already going to be meeting up with on Sunday or Monday. 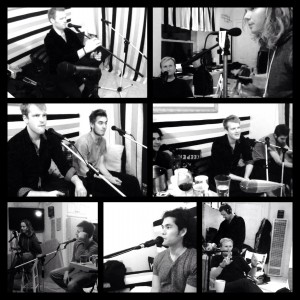 So the thinking was: We’re already going to be hanging out together anyway. So why not push ourselves and record an inspired product together?

If the people I was hanging out with happened to include some women in this field, they’d surely have been included as well. But for whatever reason, it was a group of male friends that happened to be traveling in the same place at the same time. I last hung out with these guys in Norway this past summer. We all knew each other already, and so there was already a strong brother-like connection between us.

If you’ve read some of my material on 4D relationships, these are men with whom I share strong 3D connections (mind, heart, spirit). And so we had good cause to believe that we could create a strong team dynamic and go really deep in sharing ideas and stories. We already have an established group dynamic based on encouraging each other, which can include pushing each other and holding each other accountable.

But now that we’ve recorded a couple of sessions, producing about 7-8 hours of really amazing content in just 2 days, with a third recording session planned for this afternoon, another answer is emerging too.

When men talk about relationships with other men, they share their truths differently. Add one woman to the mix, and the dynamic changes.

Same goes for a group of all women. Add one male to the mix, and the communication dynamic changes.

Balance has its place, but well-rounded also means less sharp.

Am I suggesting that some of us guys would hold back in what we’re sharing if there was a woman present — that we might become less authentic, less open, less honest, more politically correct, more restrained, more polite?

Yes. I am saying that. This program is raw, unrehearsed, passionate, uninhibited, and unapologetic.

I’d personally jump at the chance to hear a group of six conscious female friends get together and talk candidly about their relationships, their challenges, and the edges of their comfort zones. I’d love to be a fly on the wall in that conversation, without being physically present in such a way that would disturb their communication dynamic.

The program we’re recording is recorded from an all male perspective. That is obvious. And IMO that is what makes it so awesome.

As we record this program, we eat Chipotle takeout and drink wine (four bottles downed last night). We stay up late. We make coffee and keep going till 4am. We get silly at times and laugh our heads off. Luke has accidentally broken two wine glasses in two days. The kitchen sometimes reminds me of the Fight Club house.

But this isn’t a program just for men. I expect that women will get tremendous value from it too. They’d have the opportunity to see a side of men that’s too often hidden from them. They’ll surely learn some new truths about how men think of women, their relationships, and life in general.

What we’re sharing in our program is an extended glimpse into the realities of the modern male perspective on relationships. We’ve committed ourselves to going deep without holding back, sharing material that we’ve never shared before. I’ve told some stories that to the best of my recollection, I’ve never shared in my blog, podcasts, videos, or speeches.

One of our intentions in creating this program is to explore the edges of our own comfort zones. This has been a growth experience for us. I expect that all of us will feel some discomfort when we finally release this material to the public. And that’s why it’s going to be such a unique program to listen to.

That said, I’m open to repeating such an inspired project with a gender-balanced group. It would also be amazing to help make it happen with an all female group. In this particular case, inspiration happened to take us down a different path.

Update: This project has been released. It’s called Imaginary Men.