When people offer me a handshake as we meet for the first time, I look at their outstretched hand so as to acknowledge it. Then I look up, smile, and give them a nice, warm hug.

I don’t do this 100% of the time… but probably 95% of the time these days. The other 5% consists of situations like if I’m all sweaty after a workout when I run into someone and a few other exceptions that seem reasonable to me. But if there’s any doubt, I’ll give a hug.

When you respond to a handshake offer with a hug, you communicate that you like and accept the other person more completely than they expected… and so there’s less reason for them to hold back when they communicate with you. Consequently, they typically open up and share more of their true selves, which is always beautiful to behold.

I’ve noticed that when I do this, even people that might not seem so comfortable with it at first will accept that I must be feeling perfectly comfortable with them, and so the conversation that follows is able to go deeper, faster. A hug creates a very different vibe than a handshake. It’s like doing a completely different opening move in chess that changes the whole direction of the game that follows.

I’d say that perhaps 90-95% of people are completely comfortable in receiving the hug, even when they offered a handshake at first. They may even react in a way that suggests a slight embarrassment that they offered a handshake when I was obviously willing to accept a hug, as if they’re thinking, Do’h… I should have offered Steve a hug to begin with. They recognize that they attempted to raise their shields unnecessarily. So for these people, the hug acknowledges to them that my shields are indeed down, so they can relax because they won’t need their shields either. They have nothing to fear from me and nothing to protect. No degree of conflict is anticipated.

For the remaining small percentage, the hug represents an offer to connect without any need for social shields or formality. Some people don’t feel good about connecting in that way, and so it’s normal for them to feel some hesitation. But I still think it’s a good thing because I’ve let them know that the door is open if and when they’re ready to walk through it. They don’t have to ask or knock.

Most of the people in this latter group just need more time to warm up. Their initial reaction comes mainly from surprise rather than intentional resistance. They just didn’t expect a hug, probably because they’re not used to it. But as they come to terms with the invitation the hug represents, they accept it and enjoy it. Then by the end of the conversation, they give a parting hug freely and willingly, maybe even feeling appreciative that they had a chance to connect in such a delightful way.

Most of the time, but with some exceptions, the people in this latter group are men. I’m sure that doesn’t come as much of a surprise.

On very rare occasions the other person is so shielded that they decline to accept the invitation to open up. This is almost invariably due to past emotional wounds having to deal with trust. But this is pretty rare in my experience, probably happening less than 1% of the time. And even in those situations, I still think the hugs are wise. In those situations, I see my role as being a stepping stone on the person’s path back to trust and security. They may need to receive such offers from several other people before they’re ready to go there.

I’ve had my fill of connecting with people from behind a shield of formality, especially having dealt with many technical people, lawyers, and others who are quite often disconnected from their hearts and who communicate in emotionally stunted ways. I just feel so done with that approach. It’s completely phony and utterly pointless. It slows everything down, and so much of the communication that stems from this type of energy is pure B.S. anyway. You can’t speak your truth from behind a shield.

I openly hug people I do business with as well, assuming I have the opportunity to hang out with them in person at some point. For instance, I’ve hugged Morty Lefkoe many times (creator of the Lefkoe Method). I’ve hugged his wife – and even salsa danced with her too. I’ve hugged Louise Hay (from Hay House, publisher of my book) as well as many other Hay House authors and team members.

I really enjoy that whole Jerry Maguire / Rod Tidwell style of relationship. It makes business so much more fun. Why shouldn’t we share hugs with all the people we work with. I think it would be so much better if lawyers hugged each other, the judge, the court reporter, etc. when they went to work. Doctors should hug their patients. People should hug their accountants too — I’ve hugged mine!

I think formality, even in business, is just stupid. I bought into that type of keep-your-distance communication style for years. That was not so coincidentally the time period when my business tanked, sinking into debt year after year.

I was definitely not this way earlier in life. I was totally the opposite of a huggy person. During my teen years I could go months without sharing a hug with anyone. Now it’s just a daily thing for me.

Today I hugged three new people that I met for the first time at a local coffee shop, twice each. I hugged Rachelle. I hugged another friend who happened to recognize me while I was meeting with the first three. This is normal for me now and feels completely natural, but years ago it would have seemed completely abnormal to me.

For me this shift was a fairly easy one to make because I shifted from the game development industry to the personal development field, and the people who work in the latter field tend to be a lot more huggy. So just by going through this career transition, I subjected myself to a lot of hugs on the other side. I admit that I wasn’t so comfortable with all the hugs at first. It took me a while to get used to it. But I’m grateful for all those people who kept hugging me, even when I still felt some resistance to it. Gradually, over a period of years, they helped me convert from a non-huggy person to a very huggy person. I’m definitely happier as a huggy person. Hugs are wonderful… so much better than handshakes.

These days even when I’m around technical, left-brained people who clearly won’t be very huggy, I bring that huggy vibe with me. It often surprises them when I hug them, but even knowing that they may initially have some resistance to it, I still hug them anyway. I rather enjoy seeing their reactions because it reminds me so much of myself. I also believe they’ll be happier if they can undergo the same type of transition I did. They may never make that journey — it’s entirely their choice — but I just want to plant a seed for them to ponder.

In the past I used to think that hugging people I was meeting for the first time was too aggressive. I assumed that people would be turned off, creeped out, or offended in some way. But based on sharing hundreds and hundreds of hugs since then, I now believe that the vast majority of people would absolutely love to receive more hugs. Most of the time they’re just afraid to request them; they don’t want to offer a hug and have it rejected. So they play it safe and offer a handshake instead, even though they’d actually prefer a hug. By hugging them first, I assume all the risk of rejection, and they get what they want. Most of the time people smile after receiving the hug.

If I happen to offer someone a hug, and they reject it, I’m okay with that. So far that’s never happened though. But most of the time, when I turn a handshake into a hug, I’m giving the other people what they really want, and I’m alleviating them of any risk of rejection. Everyone wins.

If you happen to meet me in person, such as at an upcoming workshop, just frakkin hug me. It’s easy.

Here’s a very huggy photo from the last CGW. People love hugs… yes, even the left-brained geeky types. You just have to give them permission. 🙂 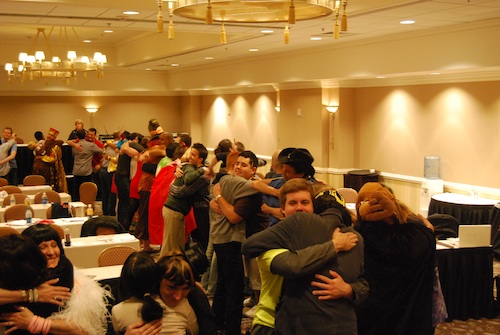 ← How To Do Everything WrongMore Info on the Upcoming Workshops →