Now that we’re into the second week of this trial and past the initial adjustment/detox period, I’ll be shortening these daily updates, sticking mostly with the basics and noting anything out of the ordinary.

Today was a very normal day, much like what I experienced before this trial began. I didn’t have any unusual emotional spikes, positive or negative. But overall I felt pretty good.

I did a typical weight workout at the gym this morning, making gains in 4 out of 5 exercises.

I forgot to mention that I measured my push-ups again yesterday. I was able to do 31. I think that’s pretty good considering I maxed out at 27 a few days ago. I’m feeling stronger and more energetic compared to how I felt before this trial.

Most of the self-discipline required involves my documentation efforts. If I wasn’t weighing and recording every single gram of food (for posterity of course), this would be a lot simpler and easier. Instead of going to the kitchen to grab a bunch of bananas and eat them, I grab the bananas, weigh them, record the weight, peel and eat them, weigh the peels, subtract the two weights to get a net weight for the edible portion, and record that as the final weight. At the end of the day I input all the figures at CalorieKing.com to get the nutritional info. And then there’s the photography, photo editing, and of course blogging these daily updates. It is indeed a lot of extra work above and beyond the actual diet itself. I’m happy to share this info, but I sometimes need to step back and separate the challenge of the diet from the documentation work to make sure I don’t confuse the two.

The diet itself has become fairly easy to follow. If I wasn’t documenting it, I don’t think it would cost me any more time than my pre-trial eating habits. I’m enjoying simple but tasty meals, and I snack on fruit while working at my desk. It’s amazing how fast and easy it is to have some fresh fruit as a snack. 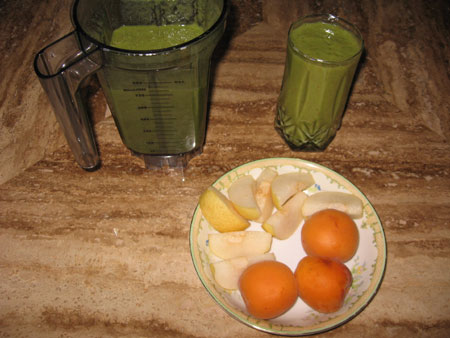 This was a very satisfying meal. The smoothie was 3 full glasses. I drank most of it in my office. 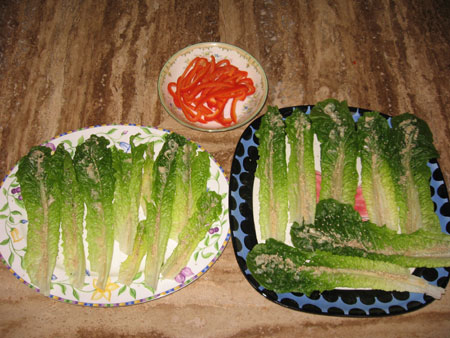 I spread a few tablespoons of tahini onto some romaine lettuce leaves. Then I sprinkled them with raw sesame seeds for a little extra crunch. Some sliced red pepper on the side rounded out the flavors.

This was easy to prepare and very tasty. Tahini and lettuce go well together. I’d definitely make this again. The downside is that it didn’t provide many calories, so I was ready to eat again soon afterwards.

I had these snacks at different times, trying to avoid eating the sweet fruit too close to the fatty foods.

I bought a case of tangelos at Costco on the weekend. They’re OK, but I like the clementines better. The tangelos seem a lot more acidic.

I had some cravings for bread this evening, but they went away as soon as I filled up on fruit.

This diet has become less mentally taxing, so I don’t have to think so much about what to eat. I’ve at least got the basics down, and I know how to get enough calories. Instead of having just 3 meals, I like spreading the calories throughout the day by snacking on fruit.

It still feels a bit weird eating so much food every day. After going shopping on Sunday, our refrigerator was packed. But I’ve already made a big dent in the supply. Previously if I saw a dozen clementines in the fruit bin, they’d last at least a week. Now they’re gone in a single meal. And that huge pile of 82 bananas from two days ago is half gone.