Update: 341 of your fellow adventurers are now enrolled in Stature, our new character sculpting deep dive. How would you like to grow your character for 2020 and beyond? Join us for this epic journey!
Launch Discount: Save 70% on your enrollment through January 16, 2020.

I went to bed at 10:30pm last night and woke up at 4am. I had such bad breath that I felt compelled to brush my teeth right away. I went back to bed and tried to fall back asleep again but couldn’t, so I finally got up at 4:57. I still had a mild headache, which cut in and out throughout the day.

I did weight training at the gym; the workout was fairly routine. For the first 10 minutes, I had a sour stomach, but that soon passed. After my workout I walked 45 minutes around the track. I didn’t plan to do that initially; for some reason it just felt really good to walk. I didn’t feel tired when I stopped.

Strangely I noticed that several people who passed by me on the track didn’t smell very good to me. I’ve been going to this gym regularly for almost two years, so I’m well acclimated to the typical sweaty workout smells. But today it seemed unusually pungent. I’ve been extra-sensitive to other smells too.

Cost of the Raw Diet

Several people inquired about how much I’m spending on food. I’m not specifically tracking that. Since I share food with my family (3 other people), this would be difficult to do. Also, the data would become obsolete as soon as food prices significantly change, and prices vary by season and location anyway.

Let’s do a little bit of figuring though. The five bananas I ate for breakfast would cost about $0.88 at Whole Foods ($0.41 if I bought them at Costco, but Costco has lousy bananas). The clementines cost about $0.17 each from Costco and about $0.20 from Whole Foods, so call it $2 max for the 10 clementines. My breakfast was under $3 then. If you count the organic Fuji apple I had before going to the gym (also from Costco, about $0.75 each I think), we’re at $3.63 for 725 calories. If we tripled this for the daily intake, it would be under $11 per day for 2,175 calories.

Obviously if I eat more expensive foods like berries, the price will go up a bit.

If I had to make a ballpark guess as to how much it costs to feed myself each day, I’d say it’s around $15 more or less, assuming I eat at home instead of going out. But if I was more budget conscious and got most of my calories from Costco bananas and most of my green veggies in the form of celery and romaine lettuce, I could eat 100% raw on less than $5 per day. If I ate fewer calories and/or didn’t exercise, it would be even cheaper.

For me the quality of the produce is the most important factor, so my current food spending seems reasonable to me.

A simple but tasty meal. 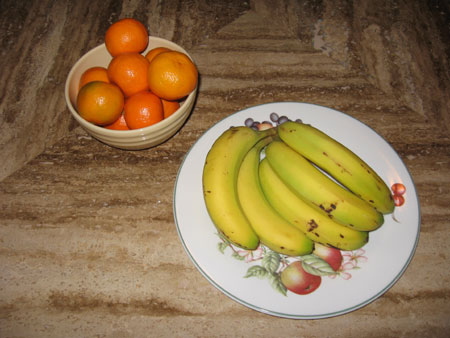 Some of the clementines were from Costco, and some were from Whole Foods. The Whole Food ones were sweeter and juicier. The Costco ones were a little dry.

I could easily have eaten more, but I decided not to stuff myself this time. Prep time was virtually zero for this meal. Just peel and eat. I liked it. Clementines are very satisfying after a workout.

Since I did a longer workout and ate a fairly light breakfast, I got hungry again and made a one-liter green smoothie: 4 bananas (488g), 2 stalks celery (68g), mixed greens (24g), 1 cup water.

I decided to try having a veggie meal for lunch without using fats like tahini or avocado, so I made a big salad with a fat-free dressing and some carrots. 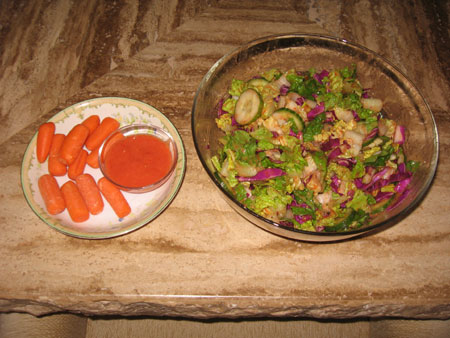 I used the leftover dressing as a dip for the carrots.

This meal was dull and monotonous. I got the dressing recipe from a raw food cookbook. It tasted promising by itself, but it wasn’t so great on the salad or with the carrots. I didn’t mind that it took a long time to eat, but this meal would have been much better with a fat-based dressing that included tahini or avocado. I don’t think I’ll use this dressing again, at least not for this particular salad.

I delayed having lunch until mid-afternoon because I wasn’t really motivated to make anything; not eating just seemed easier.

This fruit was much more satisfying than the salad.

Since I was snacking on fruit throughout the afternoon, I didn’t want a big dinner, so I just ate 3 more bananas (334g) at 7:30pm.

I waited until it felt like the bananas had passed through my stomach, and then I ate about an ounce of raw almonds (32g) for my final food of the day.

I ate tons of raw almonds during my first raw trial, often bringing them with me as snacks when I went out. But this time I didn’t feel the need to eat too many.

This was my highest calorie day so far. As previously mentioned I’m not restricting calories at all. If I went on a calorie restricting diet, I’d be eating closer to 1500-1700 calories per day. If I lose a significant amount of weight on this diet, it won’t be due to calorie reduction.

I ate 16 bananas today (57% of total calories). That’s probably a personal record for me. If I keep eating this many bananas, I’ll need to start buying 100 bananas at a time instead of only 50. Before starting this raw trial, I’d normally buy only 20-30.

I also ate 18 clementines today. I’m pretty sure that breaks my one-day clementine record too.

My physical energy felt very steady and even throughout the day. Unlike refined sugars, most fruit has a low glycemic index and provides a nice even burn without spiking blood sugar. Eating fruit is not remotely the same as eating pure fructose without the water and fiber.

Cravings were pretty strong today, especially around lunch time. I really wanted something heavy to eat, like a bowl of brown rice or a baked sweet potato. I was also craving raw fatty foods like flax crackers with guacamole. Filling the whole day with water-rich foods was largely unsatisfying. I could have downed a couple avocados after lunch easily. The hardest part of this diet for me is keeping it low fat. It would be a lot easier if I was getting 30% of my calories from fat instead of 5-15%. I know I can manage the 30 days without cooked food (I’ve done it several times before). Getting most of my calories from fruit is a tough challenge for me though. Before this trial I’d never even attempted that before.

Mood-wise I was rather grumpy for at least half the day. It was a grind making it through. Now that the initial burst of motivation has faded, this is the part that requires self-discipline and willpower to keep going. 25 more days seems like a lot, but I’m taking it one day at a time.

Fat at the end of the day

I tried something a little different today, saving the fat until the very end. The benefit of doing this is that the fat doesn’t hold up the fruit and veggies from digesting quickly, since fat takes much longer to assimilate and slows the digestion of other foods. Overall I didn’t like it. It was hard not to have any fat for lunch or dinner. I understand the reasons for eating fat at the end of the day, but I think if I continue doing that, it would make this trial even harder for me. Right now I think that’s a refinement I’m not yet ready to make.

I’m not sure where my sexual energy has gone, but it’s definitely not in my lower chakras. Since I began this trial, I hardly think about sex at all and have little or no interest in it. Even seeing the surgically enhanced women working out at the gym doesn’t do much for me. The same thing happened to me during my other raw trials. I’m broken. 🙁

I’m nearly out of fruit, so tomorrow I’ll need to go shopping, both to Costco and Whole Foods.