Today was pretty normal but certainly on the positive side. For the most part, I enjoyed following the raw diet today and had good energy. I spent most of the day working on my book, doing tons of editing. I didn’t feel like my mental endurance or creativity was any higher than usual, but it was still pretty good.

I didn’t have any euphoric feelings, but I did have a few spurts of high mental activity, as if I’d had a cup of coffee. It felt like I was buzzing from caffeine, but of course there was no crash afterwards. It was a good feeling.

At the present moment, my assessment of this diet is somewhat ho-hum. The weight loss has been nice, but it seems to have slowed quite a bit. My weight went up each of the past three days, so we’ll have to see where it ends up at the end. Losing 7-8 pounds in this period of time is still good, but it’s nowhere near the 20-30 pounds some people reportedly lose on this diet during the first 30 days. I suspect such people may either have a lot more weight to lose and/or they’re grossly undereating with lots of sub-1000 calorie days. That’s pretty easy to do if you think a banana and an apple is enough for a meal (about 200 calories total).

This diet has had some positive developments, especially the boost in muscle endurance, but I actually got better results during my first 30-day raw trial. Back then I was eating a lot more fatty foods like nuts, flax crackers, guacamole, and salads with oil-based dressings, although I still incorporated plenty of fresh fruit. I also included dehydrated foods, sprouts, garlic, onion, hot peppers, sea salt, and other items I’m avoiding for the current trial. I lost about the same amount of weight on that diet, but I was much more satisfied with the foods and didn’t suffer serious cravings beyond the first week. Furthermore, I felt better emotionally and energetically, and I didn’t have issues with dry skin or itchiness. I probably spent more time on food prep, but I didn’t have to spend nearly as much time eating. Since the caloric density of the foods was much higher, I could get plenty of calories from smaller meals. I could make large batches of certain dishes and put them in the fridge for later, so time-wise I think the higher fat diet was more efficient.

Overall I’m not super impressed with the low-fat version of this diet compared to the higher fat version. It’s entirely possible (perhaps even likely) that 30 days is an insufficient amount of time for the true benefits of this diet to kick in, but how long do I need to give it before moving on? While there have been a few really good days, on average I’m not feeling much different than I did before this trial. Perhaps the difference is more profound for people who are sick or ailing.

For a variety of reasons, this particular diet doesn’t seem very sustainable for me in the long run. My current expectation is that after day 30, I’ll go back to eating whatever vegan food I want for a while to gain some perspective. Then I’ll consider what kind of dietary approach I want to test next. There are many other possibilities I’m curious about, but it would take months to give them all a fair test. It’s highly unlikely I’ll blog future dietary trials day-by-day, since that gets pretty tedious and also makes it harder to evaluate each diet based on its own merits. I’m glad to have done such detailed logging this time, but I wouldn’t want to do it again.

Erin and the kids have all been sick with colds the past few days, but I remain healthy and symptom-free. I tell them it’s my raw immunity power. 🙂

I can’t fully credit this to the raw food diet though because last year the three of them would often get sick at the same time while I escaped unscathed. I think the biggest factor in boosting my immunity has been regular aerobic exercise. If I only do weight training for a while and skip the aerobic workouts, I get sick right along with the rest of the family. 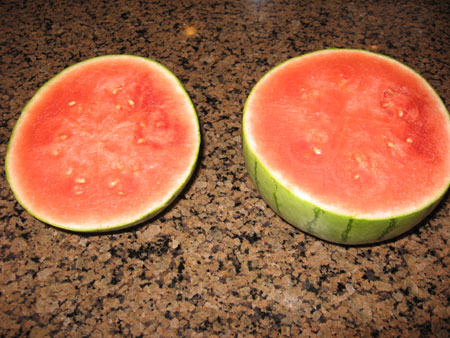 A tasty meal but not many calories. 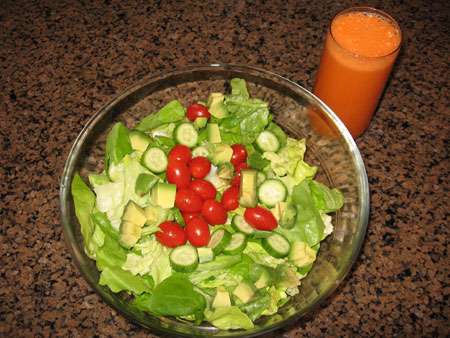 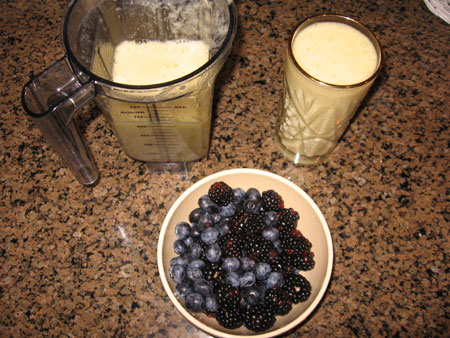 For some reason my appetite has increased during the past few days. I was doing fine with sub-2000 calorie days for a while, but now I seem to be much hungrier. The downside of eating more is that it takes even longer to eat.