Update: 344 of your fellow adventurers are now enrolled in Stature, our new character sculpting deep dive. How would you like to grow your character for 2020 and beyond? Join us for this epic journey!

This morning I woke up at 3:15am feeling poorly. I felt like I was getting a cold and had a slightly runny nose. I also felt mildly nauseous.

I was still very sleepy, but I couldn’t fall back asleep. I just tossed and turned restlessly until my alarm went off at 5:00am. I turned off the alarm feeling lousy and decided it would be best to skip my morning workout. I’d normally go to the gym to do weight training at this time, but my body just wanted to rest. I stayed in bed until shortly after 7am and dragged myself into the shower. I might have picked up an extra 20-30 minutes of sleep at best.

Weight loss and other metrics

I’ll be weighing myself every morning before breakfast and recording some other metrics as well. For simplicity I only plan to share the running weight loss total in my daily updates, but at the end of the 30 days, I’ll post the other metrics too, perhaps with some pretty charts and graphs to show the day-by-day progression. I’m even recording my temperature and blood pressure each day to see if those change.

I know from experience that people will probably still be reading these logs several years from now (as they’ve been doing with my polyphasic sleep logs), so I’ll try to make them as detailed as I can. It is time consuming to capture and record all this data, especially the nutritional info, but if it helps even one person succeed where they might otherwise have failed, it’s worth the effort.

My starting weight on the morning of January 1st was 186.0 lbs, and this morning I weighed in at 183.2, so that’s a loss of 2.8 pounds so far. It’s too soon to make a fuss about that, but I consider it a good sign. I’ve been charting my weight for many years off and on, including for the couple weeks before starting this experiment. I know from experience that dropping 2.8 pounds in one day is highly unusual for me.

My weight was been fairly stable for the past several years, usually between 180 and 185. On the day I ran the L.A. Marathon in 2000, I weighed 180. Let’s see what happens over the next few days.

As I write these log updates, I keep thinking of the scene from The Princess Bride (my all-time favorite movie and one of my favorite books too) where Count Rugen says to Westley, “What did this do to you? Tell me. And remember, this is for posterity so be honest. How do you feel?” Hopefully this experiment will have the opposite effect on me as “The Machine” did on Westley. 🙂

Onward to the food…

I didn’t feel hungry when I got up, so I waited until 9am to have breakfast. Even then I wasn’t super hungry, so I made a smaller, simpler meal than I had yesterday. 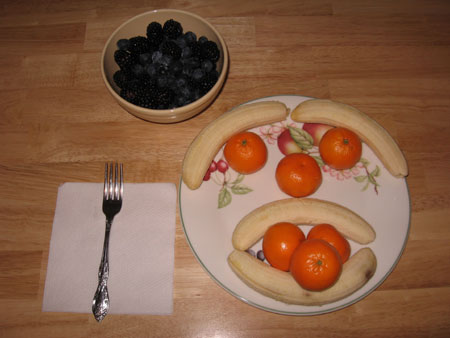 This was reasonably satisfying and filling.

I felt pretty lousy throughout the morning, feeling a bit loopy and mentally foggy, definitely subpar compared to how I felt last week. At the same time, I also felt extremely mellow and relaxed.

As I came downstairs, a familiar smell hit me immediately, and soon I saw the source — a big stack of fluffy vegan pancakes Erin had made for herself and the kids. I told her she was evil.

I decided to have another fruit meal around 1pm. 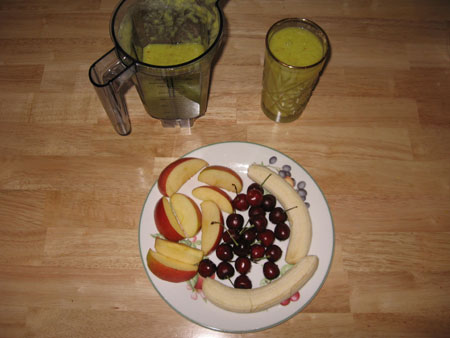 This was a hard meal to eat. I felt stuffed about halfway through. I slowly munched through the rest of the food on the plate, but I could only finish half of the smoothie. The figures above are for what I actually consumed. If I’d eaten all of it, it would have been around 700 calories for the meal.

It may take a bit of experimenting with portion sizes to figure out what works best for me. Some raw foodists like to snack throughout the day, while others prefer having 3-5 meals. And still others like to mix it up.

I had some mild afternoon drowsiness today, but it wasn’t as bad as yesterday. As the day went on, my cold-like symptoms gradually faded, although I still felt a bit foggy throughout the day.

Before I made my lunch, I saw Erin in the kitchen preparing a vegan chick’n burger with lettuce and tomato. I said to her, “Mmmm… that looks good.” She said something like, “Awww… too bad you can’t have it.” I replied, “I was referring to the lettuce.” 😉

Of course her whole meal looked delicious to me, and if not for this trial, I’d have joined her in a second. It’s only 30 days, right?

I didn’t feel hungry again until about 6pm, but I was working on a small project and wanted to finish it before having dinner, so I didn’t hit the kitchen until 7pm. I wanted something that would be mildly filling without taking a lot of prep time, so I concocted this simple meal. 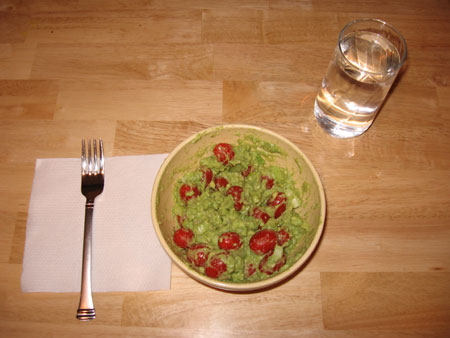 This was quite tasty. I used to make a similar dish during my first raw trial, although this is the first time I added celery. The avocado provides some fat and creaminess, the tomatoes and lime juice give it a nice tangy flavor, and the celery provides a little crunch. Dead simple to prepare and quick to eat. Don’t you love the Christmas colors?

I used to add salt or Bragg’s Liquid Aminos, which many other raw foodists use, but I did without those this time. I didn’t miss the salt.

I wonder what other veggies would go well with this. Maybe some diced carrots. If I used diced tomatoes instead of grape tomatoes, I could have spread this onto some romaine leaves and rolled it up for a basic raw wrap.

When you go vegan but not raw, it’s easy to eat substitutes for all the old foods you’re familiar with. A sandwich becomes a veggie sandwich with vegan deli slices. Scrambled eggs with bacon or sausage becomes scrambled tofu with vegan bacon or vegan sausage links. A bowl of cereal becomes a bowl of cereal with rice milk or soy milk. A burger becomes a veggie burger. Turkey becomes Tofurky. Ice cream becomes Soy Dream or Soy Delicious (or lots of other varieties). There’s vegan cream cheese and vegan sour cream. There are even vegan steak strips if you so desire.

When Erin and I first went vegan in 1997, such foods were scarce, and the ones that were available didn’t taste very good. But during the past decade, there’s been an explosion of such foods, and they taste fantastic.

Going from vegan to raw isn’t so easy though. While some raw foodists try to duplicate the foods they used to eat cooked, it can take a lot of work to do that, often involving complex recipes and a dehydrator. To really master eating raw, you have to let go of the foods you used to eat and adopt a whole new way of eating. Some items like smoothies and salads may be familiar, but that’s just the tip of the iceberg. There are many raw recipes that are unlike anything I’m used to eating. They might as well be Klingon recipes, since I can’t tell which foods might become new favorites vs. boring duds. I’ll just have to experiment to build experience.

A couple hours after dinner, I downed another green smoothie (no photo).

Although I didn’t eat as much as yesterday, I still felt like I had more than enough to eat today. The fruit-filled meals are surprisingly filling. You get to eat so much food on this diet that it really fills you up.

Although I felt lousy in the morning, I gradually felt better as the day progressed. I’m still feeling foggy as I type this (10pm), definitely not my normal self, but it’s a big improvement over the morning.

I know from experience that when I’m going through a detox period, it’s best not to push myself too hard. I may continue to skip my morning workouts and give my body more chance to rest if I feel it’s necessary. I could really use a good night’s sleep tonight.