Today was wonderful. I had great energy throughout the day and found it easy to concentrate. I also had some spurts of euphoria. I included a lot more greens today as some people suggested, so that may have a beneficial effect. I feel fantastic right now.

I’ve been monitoring my blood sugar from time to time, and I’ve never caught it spiking during this experiment. The abundance of sweet fruit in my diet simply isn’t having any negative effect as far as I can measure. So far my highest reading with the blood sugar testing device has been 91, which is still on the medium-low side. A spike might be something like 150. A reading of 40 means you’re basically comatose, and at 20 you’re pretty much dead. My average reading seems to be around 80. A diabetic would typically get much higher readings, often well over 100 even before eating.

This evening when I was feeling euphoric, I took a blood sugar reading. It was 80 (about average for me), so this feeling apparently isn’t the result of any blood sugar changes.

I’ve been pretty good at guessing what the readings will be because I can basically sense in my body how my blood sugar feels. When it drops to the 60s, I can feel it’s low and that I need to eat something. That only happens though if I do heavy weight training on an empty stomach. I’m not experiencing any blood sugar surges or crashes otherwise. In fact, my energy and alertness are amazingly stable throughout the day.

For those who predicted serious blood sugar problems on this diet, that appears not to be happening at all. I’m basically experiencing more blood sugar consistency than ever.

I’m eating more fruit sugar than I ever have in my life and consuming more calories than I was before this trial, and I’m steadily losing fat. So far my body fat has dropped 1.7 percentage points, which averages to about 1/10 of 1% per day.

Apparently my body isn’t taking all that extra sugar and calories and turning it into stored fat. The opposite is occurring.

Why do you think that is?

Whatever else you might conclude about this diet, it does seem to be an effective way to lose extra body fat and boost energy levels. I guess that’s why it’s popular among certain athletes. 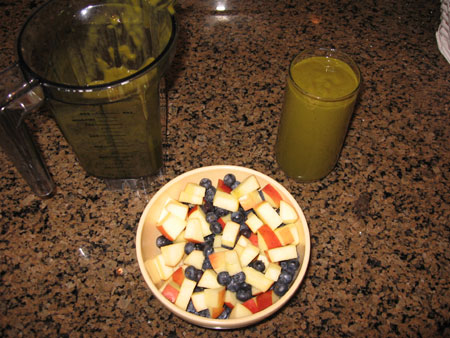 I quite enjoyed the bowl of diced apple and blueberries. It was nice to have something crunchy, and the flavors worked well together. 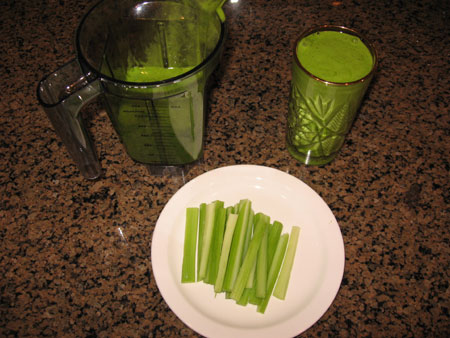 This is the first time I made a green smoothie without berries — just bananas, spinach, and water. It looks like nuclear waste. I’ve never tasted nuclear waste, so I don’t know if the flavor is a match too. In fact, to be totally honest, I don’t really know what nuclear waste looks like either. But if I had to guess, it would look like the glass above.

I’m definitely working in more green veggies today. After lunch I felt terrific and enjoyed a very productive afternoon editing one of the chapters for my book. I was absolutely delighted with how this particular chapter came out. 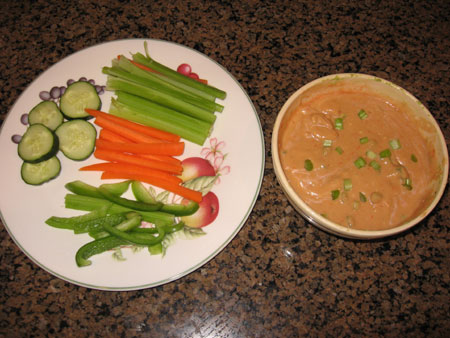 I made the soup by blending the tomatoes and avocado, then adding a little diced green pepper and celery. The rest of the veggies I ate on a plate. The soup was only so-so — the tomato flavor was overpowering — but it worked OK as a dip for the veggies.

I may need to give blended salads another try if I can find a flavor combination that works for me. The first one I made was a bit hard to suck down. If you have any favorite blended salad recipes, especially for a newbie, please let me know. If you don’t know what a blended salad is, I won’t be testing your recipes. 🙂

I had some stronger cravings for cooked food today, especially Trader Joe’s Oriental Rice Crackers. I especially love the spicy crescent-shaped ones. I wish they sold a whole package of just that kind… not now, but perhaps at the end of the month.

I’m feeling good on this diet, and I’m steadily losing weight, but I can’t say I’m sold on this way of eating. At this point I’m still looking forward to returning to cooked food. I’m running into a problem I experienced on my earlier raw trials — a conflict between making satisfying meals and efficiency.

If I want to make an interesting and satisfying raw meal, it takes me a good 30-45 minutes. If I just want to satisfy my hunger quickly, I can whip up a green smoothie in a few minutes or just down a bunch of bananas. If I favor the efficiency side, I won’t go hungry, but I’ll end up eating virtually the same thing day after day. That gets monotonous really fast and seems to magnify cravings for something different. But if I strive for varied and interesting dishes, I spend at least an extra hour per day in the kitchen, which really irks the “do it now” part of my psyche.

On a cooked food diet, I didn’t have this conflict, since most of my favorite dishes were very simple to make. One of my favorite meals was a bowl of brown rice with a tablespoon of sesame seeds. It takes a while to cook, but I can do other things while the rice is steaming. Unfortunately all these raw fruits and veggies don’t clean, peel, and chop themselves. Produce is ornery that way. I could enslave someone to do that work for me, but that seems a rather cumbersome way of feeding myself.

The social issue is also beginning to wear on me a little. I don’t eat out much, so that isn’t a big deal, but I can’t really eat with my family at home. With the three of them being on a cooked vegan diet, it’s hard for me to sit with them while they’re eating. It’s not a self-discipline issue per se. It would take a force of nature to get me to eat something cooked before day 31. But I find the sights and smells of cooked food confusing to my senses while I’m eating all raw. For some reason it greatly disturbs me.

This experiment has raised my awareness of something else as well. There’s a part of me that’s questioning whether I’m taking the notion of optimizing my diet too far. Health is obviously more than just food intake, and I’m concerned I’m giving too much of my power to something outside myself. Is it possible I’m somehow creating a more and more restrictive diet for myself as part of a process of discovering a more important lesson? That would be congruent with the subjective reality interpretation of this experiment. One way to grow is to honor your expectations, which is basically what I’m doing with this experiment. But another way to grow is to change your expectations. When it comes to diet, I’ve always used the former approach, but I’m starting to get curious about what would happen if I began testing the latter approach.

I can’t recall the source, but I remember reading an eyewitness story about a yogi (at least I think it was a yogi) who swallowed a whole bunch of mind-altering pills that would have normally been fatal — or at least caused a severe reaction — and they apparently had no effect on him whatsoever. He did it intentionally too, probably as a demonstration that he was in control of the effect of whatever he ingested. I don’t know if that story is true, but the very notion is a challenging one to consider. Is it possible that the best way of eating is to stop assuming that food has any power over us except that which we give it via our beliefs?

I hope that doesn’t come off like I’m lamely trying to justify a return to cooked food. I’m just sharing the honest realizations I’m having along the way. Make of it what you will.