Today was another good day, although I wouldn’t say it was quite as good as the other days this week. Overall I felt pretty much normal today but not uber-fantastic.

I had a typical weight workout at the gym this morning. I notice the weight training workouts have become more taxing, but I’m using heavier weights than I was at the start of the month, so that’s to be expected. At least I’m continuing to get stronger, so this diet has had no discernible adverse effect there.

My skin is still a little itchy at times, but it’s not as bad as yesterday. The dryness of my hands, especially my knuckles, looks like it has improved a little too. I didn’t peel any citrus fruit today aside from extracting a little juice from a lemon and a lime, so I wonder if the acid from the clementines and tangelos was contributing to the problem.

I ate a little differently than usual today, saving the big salad/fat meal until dinner. I also didn’t have any green veggies until dinner. Some people have suggested that I seem to feel best when I eat the most greens. That could be true. I’ll try spreading the greens throughout the day to see if that improves how I feel, but this current baseline certainly isn’t bad.

Someone asked in the forums what my pre-trial vegan diet was like and whether or not it was low fat. I wasn’t logging my food intake in the weeks before this trial, and I’m sure it varied from day to day and year to year, but I was still eating a high carb diet, although it definitely wasn’t this low in fat. On a typical day, I was probably getting 20-25% of my calories from fat. I found an old food log from March 28, 2007 that showed I got 22% of my calories from fat, 68% from carbs, and 10% from protein. On days when my exercise pattern matched what I’m doing now, I’d eat about 2000 calories. On average I’m eating more calories for this trial than I used to, but I appear to be steadily losing weight.

My diet was primarily centered around cooked whole grains, especially oatmeal, brown rice, whole grain pasta, and sprouted grain bread. I ate many fruits and veggies (raw and cooked), but the bulk of my calories came from grains. I also ate tofu, tempeh, and seitan, but not every day. I’d often eat fresh fruit as snacks, especially apples and bananas, and I’d make big salads with home-made dressing or Follow Your Heart Thousand Island Dressing (a dressing that is lower in fat than most others).

I especially loved spicy food and would consume many meals with pepperoncinis or copious amounts of hot sauce. When eating out my favorite restaurant was a local Thai food place called Komol, and I’d keep adding spice to my food until I started sweating. I also loved garlic, especially with pasta or stir-fried veggies. Almost every salad dressing I made from scratch would include garlic.

I didn’t eat any microwaved foods. I haven’t actually used a microwave oven since July 2005, even though there’s one built into my kitchen. After reading a little about the dangers of microwave cooking, I did a 30-day trial of being microwave-free. Surprisingly I didn’t miss the microwave at all, so I simply defaulted to doing without it. I don’t know if the dangers are as real as some anti-microwave people claim, but since I’m not using it anymore, I don’t worry about it.

The average American apparently gets more than 40% of their calories from fat. It’s well-established that a diet that high in fat contributes to all sorts of health problems, including heart disease, cancer, and diabetes. Even vegetarians and vegans can easily reach this level if they consume a lot of dairy or oil or high-fat treats. And raw foodists will automatically exceed 40% if they center their caloric intake around nuts, seeds, oils, avocados, and coconut instead of fruit. Because fat is so calorically dense, you don’t need to eat a lot of it for the fat calories to add up. In my experience most raw foodists are exceeding 40% of calories from fat. If you aren’t eating tons and tons of fruit, you default to getting calories from fat on this diet.

Unfortunately a lot of people mistakenly think that a diet that gets 30% of its calories from fat can be considered low-fat and healthy. Guidelines published by the U.S. government often cite this 30% target, but I wouldn’t use that figure because it’s rooted on politics, not real-world data. The meat and dairy interests don’t want fat recommendations to drop below 30% because below that level, the average American will need to start cutting meat and dairy products from their diet to bring the fat down, and that’s bad for business. So the U.S. fat recommendations are always on the high side. If you follow them, they won’t do you any good health-wise, so it’s best to look elsewhere for dietary guidance.

Less biased sources suggest getting your fat intake down to 10%, 15%, or 20% of calories or less, depending on the source. From what I’ve read, the pattern seems to be that fat intake starts contributing to health problems once you get past about 15%, so I think that’s a reasonable maximum for most people, although 10% is probably better. 30% is well into the range of serious long-term health problems. And 40% is basically slow suicide (fast suicide if you die from a heart attack or stroke). We Americans are literally eating ourselves to death.

Before I started this trial, I figured getting 20-25% of calories from fat would be considered low-fat and pretty good health-wise. I’ve been doing a lot more research into this topic lately, and it appears I was totally wrong in making that assumption. Even 20% is on the high side. Whether I continue eating raw or return to cooked food after this trial, I plan to continue keeping my fat intake much lower, no more than 15% of calories and ideally less than 10%. Interestingly, even long-term raw foodist Dr. Graham recommends that if you have to make a choice between low-fat cooked food vs. high-fat raw food, go with the low-fat cooked option.

If you want to learn more about this topic, there’s a detailed chapter on fat in The 80/10/10 Diet, which I think is a good place to start. The numbers in the title refer to getting at least 80% of your calories from carbs and no more than 10% each from fat and protein. You can actually aim for those nutrient targets even without eating an all-raw diet. 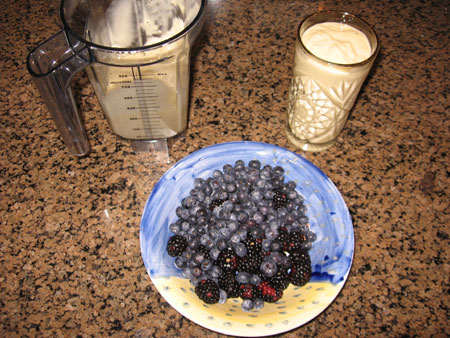 I wanted a simple lunch, so I settled for this mono-meal. It wasn’t too exciting, but it filled me up until dinner time. 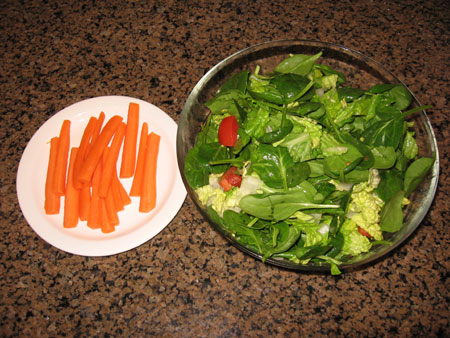 I’m starting to get a little bored with these big salads. They were nice at first, but I could use a little more variety. They take a long time to eat due to all the chewing (about 30 minutes).

I’m doing a good job of keeping my fat intake below 10% of total calories. It doesn’t seem too hard to sustain these ratios now. I’m not craving the fatty foods as much as I was at the beginning of this trial.

Now that I’ve seemed to reach a point of basic stability on this diet, for the remaining 12 days I’ll be thinking about whether this is the kind of long-term lifestyle change I’d want to make. I’ve been thinking about my polyphasic sleep trial from 2005-2006. It lasted 5-1/2 months before I finally returned to normal monophasic sleep, the main problem being that I felt too much out of sync with the rest of the world. I anticipate I might have a similar problem maintaining this high-fruit raw diet in the long run. It’s not merely a different way of eating — it’s a rather different way of living.