This was my fourth good day in a row. If there’s a hump to get past when adapting to this diet, I’m probably past it. I didn’t feel euphoric today, but I felt very positive and happy, and I had plenty of energy with no daytime drowsiness.

I had a good aerobic workout at the gym. I noticed that when my heart rate was around 150 beats per minute, it didn’t feel as strenuous as I felt it should have been. I thought I was only around 130. I’ve been exercising aerobically (running, biking, gym equipment) regularly since the early 1990s, and I have a pretty good sense of how my body feels at different heart rates. I normally exercise in the 145-150 range, and this time it just didn’t feel like I hit that range even though the machine said I was holding steady at 150.

I’ve heard other raw foodists report that their breathing improved, but I didn’t quite know what they meant by that. I think I caught a glimpse of it today. I feel like I can breathe more deeply than usual. It’s like the feeling you get after eating lots of spicy food — when it feels like you’re breathing through your ears because your sinuses are so clear. But in this case the feeling was in my lungs. It feels like they’re pulling more oxygen from the air. I have no idea if that’s what is really happening. I’m just describing what it feels like.

The dry, cracked skin problem on my knuckles is slowly spreading to the rest of my fingers. My hands look very dry. I’ll try using some moisturizer (as some people recommended), but the dry desert air doesn’t help much. I don’t think this dryness is related to what I’m eating but rather due to handling and preparing so many fruits and veggies. I wash my hands a lot more often, and the acid from foods like tangelos or clementines gets on my hands frequently.

Several times today I felt itchy all over my body. It was especially noticeable at the gym when I started to sweat, but I still feel itchy right now. Every few seconds some body part starts to itch. It seems fairly random, but it’s mostly on my legs and back. It lasts maybe 10-20 minutes and then seems to go away for a while.

Today my body temp reached its lowest point of the trial so far: 97.5 degrees. For the first week of this trial, it never fell below 98.5. Now I’m a full degree cooler. Perhaps I’ll soon be joining the ranks of the undead.

I’m still feeling a bit sensitive to the cold. For the past two days, I’ve turned up the heat in my office to make it 2 degrees warmer. It was 28 degrees outside this morning, but even indoors I’m feeling colder than usual. 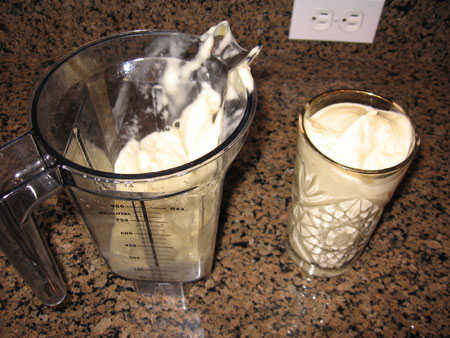 The shake came out very thick, almost like soft serve ice cream. It was a great way to start the day. I made it with frozen bananas. Someone asked me if I froze bananas with or without the peels. I always peel them first. Bananas are extremely difficult to peel when frozen. I always peel and freeze bananas when they start to get overripe.

Freezing fruit does cause some reduction in the nutritional value, but it’s far less damaging than cooking and doesn’t introduce any new toxins.

I ate the watermelon and the banana at different times, since melons are best eaten away from other foods. 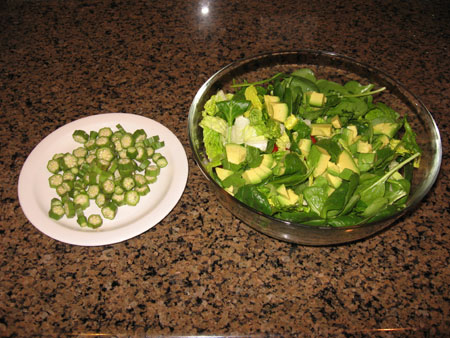 Apparently I like this salad, since I’ve made it a few days in a row. I’m still impressed with how good it tastes with no dressing other than lemon and lime juice. Of course the half avocado adds a bit of fat, about as much as a tablespoon of oil in this case. 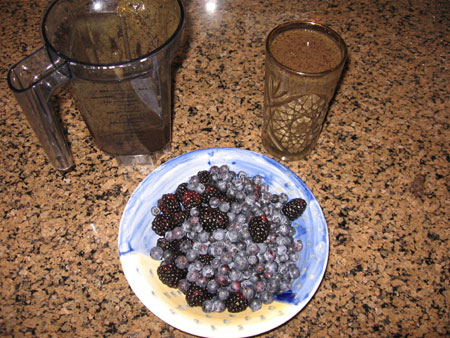 Blueberries are still one of my favorite foods.

Nutritionally this day was almost identical to yesterday.

I had some minor cravings for cooked food today, but they passed once I ate more raw food. I don’t think it will be a problem for me to make it through the remaining 13 days of this trial, but I’m still uncertain as to whether I’d want to continue with this diet in the long run. As you can probably imagine, it would require a significant lifestyle change. I’m still spending more time in the kitchen than I did before, and I’m definitely spending more time eating. But I must keep in mind that measuring and reporting what I’m eating significantly increases the required effort. This trial would be much easier if I wasn’t tracking everything so meticulously.