Today was another very good day, so that’s two in a row. It wasn’t quite as good as yesterday, but it was close. It started with a slightly sluggish morning workout, which was really my fault because I didn’t eat anything before doing weight training. Normally I eat a piece of fruit on the way to the gym, but I skipped it today and regretted it halfway through my workout when I could tell my blood sugar was getting low. However, after breakfast I felt very happy and energetic and had very steady energy for the rest of the day. My focus and concentration weren’t as strong as yesterday, but I did OK in that area too.

I had some strong cravings for cooked food, especially tofu, in the afternoon. I wasn’t even hungry, but I was just craving something different than raw fruits and veggies, especially something salty and high in fat. I ate about 2 pounds of watermelon, which helped, but the cravings were very strong and it was hard to tune them out. Other than this the rest of the day was pretty easy.

My weight popped back up 0.4 pounds to 180.2. Net weight loss is 5.8 pounds in 14 days. It certainly seems like the rate of weight loss slowed after the first week. 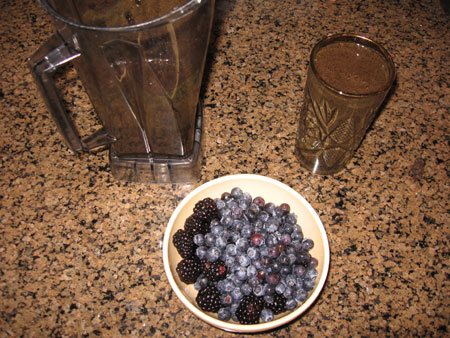 I have two containers for my high-speed blender. One holds about a liter, and the other holds about two liters. I normally use the smaller container, but I started using the bigger one so I could squeeze more greens into my smoothies. This one probably had the most of all of them, and it didn’t taste bad at all. I think I’m really getting used to these. They definitely don’t taste as bad as they look. The fruit really overpowers the greens. 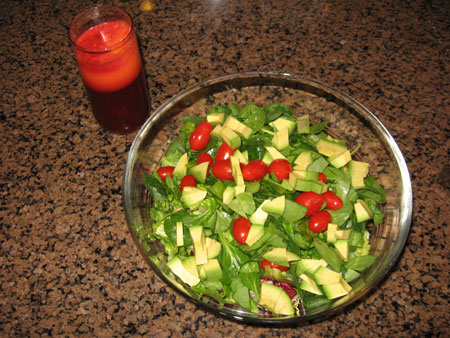 I really enjoyed this meal. The avocado was especially good.

This is the first time I tried making a raw soup. All of the raw cookbooks I own have several raw soup recipes. I noticed that mango and tomatoes were common ingredients, so I concocted this one in a few minutes. I blended the mango and kiwi together, poured it into a bowl, and stirred in chunks of chopped tomatoes. The idea of cold fruity soup never had much appeal to me, but this one was quite good. The consistency was thicker than split pea soup. It even tasted mildly spicy, but I’m not sure why. Maybe the spiciness came from the blended kiwi seeds.

I may experiment more with raw soups. This was one was low-fat and had a decent calorie count compared to a salad.

I’m delighted to have made it halfway. It hasn’t been easy, but it’s been very educational. I’m still trying to reach the point of stability, where I can at least feel consistently OK from day to day.