Today was another down day, so apparently I’m still stuck in this yo-yo pattern. I did a typical weight training workout at the gym this morning, and it went fine. But after breakfast I felt listless and mentally foggy, and I couldn’t shake it for the entire day. I spent a lot of time playing with the kids today, which lifted my spirits, but otherwise I was stuck feeling slightly depressed, bored, and totally unmotivated.

For much of the day, I felt like I lost my motivation to eat. Even when I was hungry, I’d think to myself, “Eh. Why bother?” Today I basically just ate to avoid hunger, not because I enjoyed what I was eating. Eating almost seemed like more trouble than it was worth.

I went grocery shopping this evening. The grocery checker at Albertson’s looked at the conveyor belt filled with bananas — 84 of them — and asked me, “Do you have a monkey at home?” I told her I was the monkey. She asked me what I was going to make with all those bananas. I told her I was just going to eat them, maybe as many as 15 a day. I don’t think she quite believed me.

It’s been 6 days since my last grocery shop. I think with a little practice it wouldn’t be hard to shop only once a week on this diet, assuming you have a big enough refrigerator.

My body temp was still 98.0 degrees, so apparently I’m running a little cooler. 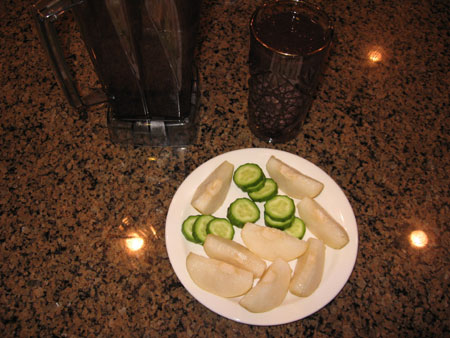 This light breakfast went down easy, but I was in a state where I didn’t really care much about what I was eating. I felt like I was just going through the motions. I didn’t really want to eat; I just wanted to avoid being hungry. 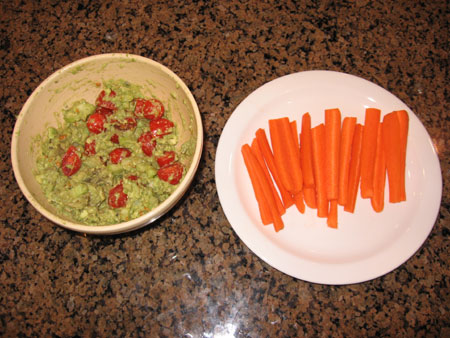 I just wanted something uncomplicated, and this fit the bill. I like these avocado bowls. I just wish they provided more calories without serving up too much fat.

This is the first time I tried making a banana shake with nothing but frozen bananas and water. It came out great. The kids saw me drinking it, had a sip, and made me make them one too. Then I made a second one for myself.

I actually had a craving for celery this afternoon, and it tasted unusually good when I snacked on it. I wasn’t a big fan of celery before this trial, but I’m beginning to like it. I think I’m becoming more sensitive to its delicate, salty flavor. 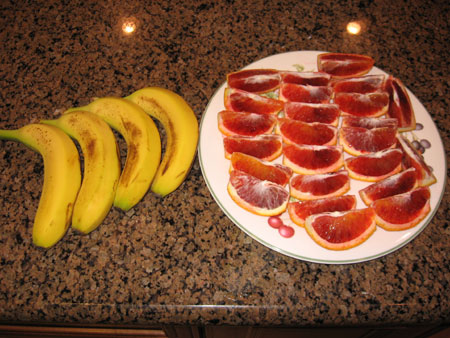 This is the first time I’ve had blood oranges. They really do look like they’re filled with blood. I almost didn’t want to eat them, since the color was a turn-off. The sign at the store said they’re sweeter and less acidic than other oranges, but they tasted sour to me, like a cross between an orange and a lemon. It made my cheeks pucker to eat them. Erin tried a slice but didn’t like it. She’s had blood oranges before and said they were usually very sweet. Maybe I got a bad batch. All 3 of them tasted pretty much the same. I only bought 3 to try, so I probably won’t buy them again for this trial.

These emotional ups and downs are quite a rollercoaster. I hope a more consistent pattern emerges before this trial is up. Those good days are really nice, but at this point I’d settle for some stability.

I’m scheduled to play disc golf tomorrow with 3 Toastmasters/NSA friends. It’s been a few months since I’ve played, so I’m curious to see if I can still throw straight.