Today was a marked improvement over all the other days of this trial. Shortly after breakfast I gently slid into that euphoric/blissful state and spent most of the day there. I still feel it now, although it’s not as pronounced as it was in the morning. I also got a lot of work done today. No task seemed difficult since I was feeling so good. I remember this feeling from my first 30-day raw trial, so I’m happy to see it return in such a big way. At one point the feeling was so intense I almost started to cry from being too happy.

How can I describe this euphoric feeling? Imagine all the cells of your body overflowing with joy. That’s basically how it feels. It’s a positive energy I feel throughout every part of my body… like being in love.

I did make a small change that could have contributed to this. Instead of worrying about getting enough calories, today I focused on eating more veggies. I probably ate more veggies today than on any other day of this trial. Early in the day I ate very lightly (just a green smoothie and some celery for breakfast), and even though I could have eaten more, I only ate enough to assuage my hunger. On previous days I felt like I had to stuff myself to get enough calories, but I avoided doing that today.

I had a very normal aerobic workout at the gym this morning, so nothing special to report there.

I didn’t go to the bathroom as often today, only 3-4 stools total, which is about half of what it was for the last several days.

I still have terrible morning breath. That’s been true every day since I first reported it.

I am not having any headaches. Those have been gone for days.

My body temp was back to a normal 98.6 degrees earlier today, but now it’s down to 97.9, my lowest reading of this trial. That seems a bit strange to me.

I’m no longer suffering from mental fogginess. That vanished a few days ago. Today I felt incredibly clear-headed, and it was easy to focus and concentrate.

For a few days my sleep was reduced by about an hour per night, but now it seems to be back to my previous pre-trial norm. The reduced sleep may have been an artifact of the initial detox period.

I haven’t had any further problems with low libido since I first reported it several days ago.

Erin keeps telling me I smell differently — like plants. Sometimes she says I smell like cloves too, even though I haven’t included cloves any in this diet. She wonders if my skin will turn green and jokingly reminded me of the time my skin turned orange. True story — on a previous raw food diet trial, I was eating and juicing so many carrots that my skin actually turned orange for a day or two. Apparently it’s called hypercarotenemia. It went away as soon as I stopped eating carrots for a while.

I find this diet pretty easy to manage now in terms of food prep. Most of my meals are quick to prepare and to eat. The only thing that really takes a long time to eat is when I make a big salad. I am, however, a little bored with the apparent lack of variety. Variety-wise I think I’m doing a decent job incorporating different fruits and veggies, but it’s still getting boring eating so many fruits and veggies. I’m not including any salt, oil, spices, onion, garlic, or hot peppers on this trial though, so if I wasn’t as strict, I’d have better ways to incorporate more variety.

I didn’t really crave any cooked food today, although I wouldn’t have kicked it off my plate.

Some people asked me about my opinion on eating locally grown produce, ostensibly to minimize the environmental impact. I suppose that would be possible if I lived in California, but the desert city of Las Vegas isn’t a great place for locally grown anything unless I want to eat lots of cactus. Winter temperatures can fall to the 20s, and the summer heat can soar past 120 degrees. We’re also surrounded by (mostly barren) mountains here, not farmland. We basically have to import everything. Virtually all of my produce comes from California, Mexico, and South America.

There are some farmers’ markets here, but they’re very small and don’t offer much, and I don’t think they have them during the winter anyway. That’s one thing I miss about California. I used to love going to the farmers markets, especially for the strawberries.

I do care about the environment, but even if I could favor local produce, the impact would be negligible compared to other lifestyle decisions I’ve already made. The evidence overwhelmingly points to going vegan as the single best thing I can do to minimize my individual environmental impact, and I made that switch 11 years ago. Pretty much nothing else I can do in my lifetime will come close to that. I can stop driving a car, stop using all water, and stop eating completely, and it won’t make nearly as much difference in terms of resource savings as when I stopped consuming animal products. We expend an enormous amount of resources in the production of animal products. If you ever take the time to look into it, you’ll find it’s pretty insane. On the other hand, if we ever want to free up vast resources and massively curtail pollution, we always have the option of scaling back the billions of feed animals at any time.

Are you aware that nearly half of all the water usage, 1/3 of all fossil fuels, and 80% of all agricultural land in the USA goes to the production of animal products? It’s an incredibly wasteful industry, especially considering that we have to grow most of our crops just to feed those animals. You actually save more water by not eating a pound of beef than by not showering for an entire year, not to mention all the other resources consumed and the pollution and waste production. Consequently, I don’t think it’s an exaggeration to say that a non-vegan environmentalist is an oxymoron. (If you want to peruse a good source for such stats and details, The Food Revolution is a great place to start.)

It’s not that favoring local produce doesn’t help, but if you’ve already gone vegan, then it’s sort of like asking a bald man to get a haircut. It’s a distraction from the bigger problem. If you want to save tons of water and energy and cut down on a great deal of pollution, just skip your next burger (or convince a few others to do the same). Unfortunately there are certain interests that would rather see you fuss over where you buy your tomatoes than look into where the real waste occurs. But if you’re going to fish in the environmental sea, then fish for whales, not minnows, at least if you want your efforts to matter.

You’ll have a more positive environmental impact if you drive a Hummer, shun recycling, buy all your stuff from the opposite side of the planet, and eat vegetarian a few days per week vs. eating a SAD diet while going completely green in all other areas. I know it’s hard to make the connection between that bite of chicken and the destruction of rainforest, but it is what it is. The chicken isn’t too happy about it either. 😉 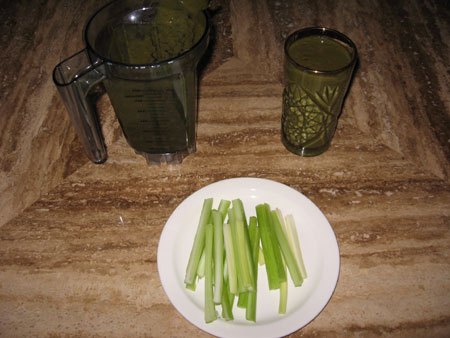 I opted for a small meal this time, going for more veggies instead of fruit. This was barely enough to cover the calories I burned during my workout.

I learned that apricot pits consistently weigh 4 grams each, so whenever I weigh an apricot, I just subtract 4g for the pit I’ll throw away.

A big green salad and some veggies. 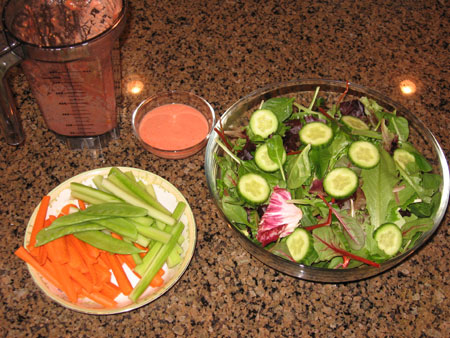 This took me a long time to eat — about 45 minutes. It required a lot of chewing. 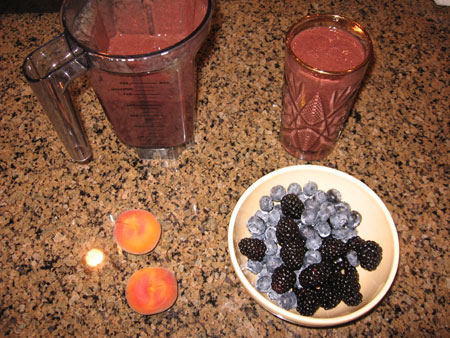 By this time I actually wanted something sweet to eat, so this really hit the spot.

I’d love to have more days like today and feel this good consistently. For the past few days, my results have been yo-yoing. I’ll continue experimenting within this framework to see what works best.

Thanks for the Support and Encouragement!

The feedback I’ve been getting about this 30-day trial has been very supportive, aside from a few high-protein nutters who take exception to the fact that I haven’t died yet. Whether people agree with this diet or not, virtually everyone seems to appreciate the fact that I’m doing my best to report the experience in so much detail. People are very curious to see how it turns out. I’m pretty curious myself.

I was originally planning to do daily updates for the first week and less often after that, but I’m still noticing a lot of day to day change, so I’ll continue these daily reports unless I seem to reach a consistent period where I don’t have much to say except, “Today was just like yesterday.”