Today was a strange day. I’ll explain why in the meal section of this post, but I want to address a few other items first.

My weight workout at the gym seemed more challenging than usual, but that’s probably because I progressed to heavier weights than I was using last week. I didn’t have any problems and made it through the workout just fine.

Steve Jobs was a Fruitarian

I’d heard that Steve Jobs was a fruitarian during the 1970s, but I never bothered to look into it before. With some digging I found this quote from him:

I was actually a fruitarian at that point in time. I ate only fruit. Now I’m a garbage can like everyone else. And we were about three months late in filing a fictitious business name so I threatened to call the company Apple Computer unless someone suggested a more interesting name by five o’clock that day. Hoping to stimulate creativity. And it stuck. And that’s why we’re called Apple.

I suppose they were also late naming the Macintosh, but perhaps they got their suggestions in on time for the iPod. Otherwise we could be listening to MP3s on the iSeed. 🙂

I wonder why he decided to revert from fruitarian to “garbage can.” At least he named his company before the switch. Garbage Can Computers might not have done so well.

A couple nights ago I dreamt I was eating only raw food, so this diet has infected my dreams. Something similar happened when I first went vegan. After a while I began favoring vegan food in my dreams too. If I dreamt I ate something like hot dogs, I’d get really confused because it wouldn’t feel right. When I have a lucid dream, I never eat animal products; even though I know they aren’t real, I can’t bring myself to try them without being totally disgusted by the idea.

Shortly after I started this trial, I noticed that my left thumbnail had a lot of dirt/grime under it. All my other nails were clean, but this one was filthy. No big deal — I cleaned it. But a few days later, that same thumbnail had become dirty again while all my other nails remained clean. It was a minor head-scratcher, but eventually I figured out it was caused by using that thumbnail to peel so much fruit each day. When I peel a banana, I always dig my left thumbnail into the top of the fruit as I crack the stem off. I also favor my left thumb when peeling clementines or tangelos, since I’m left-handed. This is causing some material to get trapped beneath the nail, making it very dirty within a day or two.

So if you happen upon someone with an unusually dirty thumbnail, perhaps s/he is a raw foodist. 🙂

For the first week of this trial, my body temperature readings were consistently between 98.5 and 98.9 degrees. But yesterday it spiked to 99.6, and today it dropped to 98.1. I don’t know what to make of that yet, but it does seem a little strange. I take these readings after I’ve been sitting at my desk for a while, several hours after my morning exercise.

I just checked my temperature again right now, and it’s holding at 98.0, my lowest reading of the whole trial. In fact, I think that’s the lowest temperature I’ve ever seen for myself at this time of day. That definitely isn’t normal. Maybe it’s a fluke, but if it stays low like this, I’d consider that a significant physiological change.

This was about as fast and easy as it gets.

After all this sweet fruit in the morning, I started feeling nauseous around 11:30am.

Have you ever had that grossed-out feeling from eating too much of the same food, like too much chocolate, and you can feel this greasy puddle in your stomach? I started feeling a sensation similar to that, like I ate way too much of something that didn’t agree with me. Maybe it was the 11 bananas I ate this morning.

I barely wanted to eat anything for lunch, so I just made this simple veggie meal. 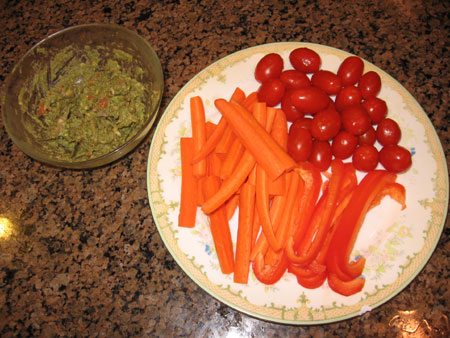 The dip was left over from yesterday.

After this meal I still felt a bit nauseous, and then I started getting really sleepy, so I went upstairs and tried to take a nap. I couldn’t fall asleep, but I stayed in bed for a while since I wasn’t feeling well. I wasn’t overstuffed, but I felt like something wasn’t digesting well. Slowly I started feeling better, and my appetite returned, but for a few hours I didn’t want to eat anything, raw or cooked.

I decided that maybe I should lay off the bananas for a while, so I had a banana-free dinner. 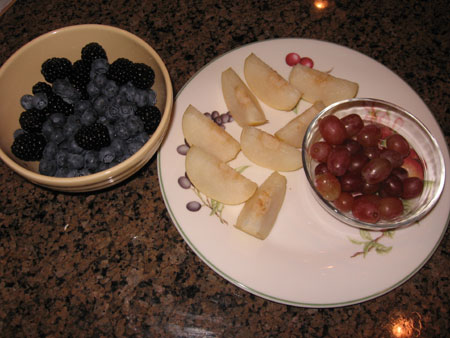 This meal went down well, and I continued to feel better afterwards. It wasn’t many calories, but my digestive system still felt a bit unsettled, so I figured it was best to keep it light and not eat anything more for the day.

I didn’t eat as much today as I did most days of this trial, and I kept my fat intake really low (only half an avocado). This was mainly because I wasn’t feeling well, which dampened my appetite.

I’m starting to develop a love-hate relationship with sweet fruits. When I first began this experiment, it was something new and interesting to explore. But after 10 days of eating pound after pound of fruit, I must admit I’m getting a little sick of so much sugary-tasting food. When I’m staring at my 15th banana of the day, my stomach and taste buds may object: “Blech! Haven’t we eaten enough of that today?” But if I don’t eat it, I risk feeling hungry because I’m not getting enough calories. Bananas are one of the best foods on this diet, since they’re inexpensive and calorically dense. By comparison if I were to get all my daily calories from blueberries, I’d have to eat about 10 pounds of them, and it would cost me almost $50 per day.

Don’t get me wrong — most of the time I enjoy those fruit meals. 10-12 clementines are usually quite refreshing. But eating so much sweetness all day long is growing a bit stale. I don’t mind eating 100% raw, but consuming so much fruit doesn’t feel quite right to me.

I still intend to follow this particular diet for the full 30 days unless I run into serious complications. These feelings may eventually pass, and 10 days is just too little time to make a fair assessment. But if this was already day 30, I wouldn’t continue eating this way on day 31.

Even within the raw foods community, there’s some debate as to the best fruit-fat balance. Not everyone seems to do best with the same type of raw diet. One of the challenges is that all of the anti-high-fat diet studies were done with cooked fats. It’s well established that a diet high in cooked fats is no good and can lead to serious life-threatening problems like clogged arteries. But cooked fats are chemically very different than raw fats like avocado or raw nuts. So there’s some debate in the raw community as to whether raw fats are harmful or helpful in the same manner as cooked fats, and what level of overall fat intake is ideal. Until some studies are conducted to test the long-term health effects of raw fats as part of a raw diet, we’re stuck with a big question mark.

I also wonder if this is an area where people may have some biological or seasonal differences. My ancestry is Czech, German, and Lithuanian, all northern climates where fresh fruit might not have been a practical choice during the winter.

The first 10 days of this trial have been quite challenging, but I’m learning a lot from the experience, far more than I’d ever learn by reading about it. At this point I really don’t know what to expect from the next 20 days. Given the ups and downs I’ve been experiencing, there are few outcomes that would surprise me.