Like many parents I like to encourage my children artistically. In my home office, there’s a cork board on the wall across from my desk where I proudly post their latest creations.

A few days ago, my daughter Emily (age 6) told me she wanted to draw me a bear to add to my collection. Previously she had traced and colored about 10 bear drawings from an original version I made for her.

She planned to use the same process to create bear #11, but this time I asked her to try making her own bear from scratch instead of tracing it. She gave me a shrug and went off to her room to try.

I gave her a hug and calmed her down. Then I explained to her, “Emily, I don’t want you to make a bear just like the other ones. I want you to make your version of a bear. I don’t even care if it looks like a bear. I just want it to be something you create. I want an Emily original.”

I explained to her that it was impossible to fail. All she had to do was create something. She gave me a doubtful look but agreed to try. 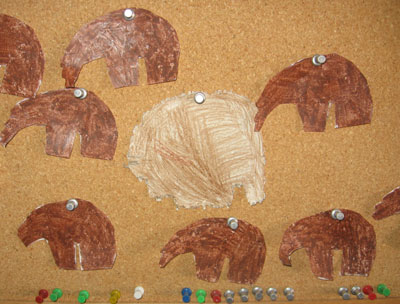 A while later she came into my office, cleared a spot on the cork board, and pinned up her latest bear. She was no longer frustrated… just happy.

Emily’s bear may not be as polished or uniform as the traced bears. It may be a bit rough around the edges (quite literally if you look closely). It may not even be recognizable as a bear to most people… a buffalo or a yak perhaps.

Obviously her bear is precious to me just because I’m her father. It’s an expression of her creativity and our special relationship. But there’s more to it than that.

The bear in the middle stands out from the crowd. He’s unique. In fact, it’s the backdrop of the other bears that allows him to express his uniqueness.

The traced bears are very puzzled by the middle bear. Why isn’t he like the rest of them? Why do his lines zigzag instead of go straight? Why is he so rounded and not as chiseled? What gives him the right to be unique? Shouldn’t all bears be the same?

Publicly the traced bears ignore, ridicule, and do their best to avoid the middle bear. But privately in the depths of their bear souls, they aspire to be more like him. The middle bear’s presence is a constant reminder of the courage they do not have. With their minds they hate him for it, but with their hearts they love him for it.

The middle bear is brighter than any other bear, and as hard as they try, the other bears cannot look away. Simultaneously they feel despair at being traced bears along with the hope they can grow into something more.

The middle bear was the result of conscious creation. The others were created by cloning.

Which type of bear are you? Is your life the result of conscious creation or cloning? Are you trying to be like everyone else, or can you summon the courage to be the bear in the middle… to shine so brightly that even the other bears begin to reflect your light?

If a six-year-old girl can do it…

Take the Red Pill... and Free Your Mind

Thanks for requesting access to the Subjective Reality Breakthroughs video series. To watch the videos, please click the confirmation link in the email that has been sent to you.

Are You Still Resisting Life's Challenges?

Thanks for requesting the Extraordinary Gratitude PDF. To receive your download link, please click the confirmation link in the email that has been sent to you.